Two of the most notable & iconic images of ancient Japan are the ninja and the samurai. The differences between  Samurai and Ninja are stark. Samurais were military warriors that belonged to the nobility of ancient Japanese society. By contract, Ninja 忍者 (known as “shinobi”忍び in Japan) were frequently mercenaries, and as such they would most likely belong to the lower class of early Japanese society.

Samurai 侍 (called “bushi” or “buke” in Japanese) as military men were known in Japan’s history starting from the 7th century when they first used for putting down rebellions in distant provinces. And by the 12th century they formed clans and rose to such a power that they turned Japan into a samurai-dominated government, the Shogunate, with the Shogun at the top of the ruling hierarchy. The Samurai rule went in decline in the late 19th century during the Meiji Restoration

Both the Ninja and the Samurai were employed by powerful Japanese clans to do their “dirty work”.

Samurai Weapons can be roughly grouped into three categories: swords, polearms, and exotic weapons. Samurai used different arms depending on their class and circumstances, but all Samurai had and used swords. The subject of samurai swords fascinated people around the world for several decades now. Started in 1954 by Akira Kurosawa in his most famous “Seven Samurai” film, the number of movies featuring Samurai and Samurai weapons is almost countless at present time and keeps growing.

Samurai Weapons can be roughly grouped into three categories: swords, polearms, and exotic weapons. Samurai used different arms depending on their class and circumstances, but all Samurai had and used swords. 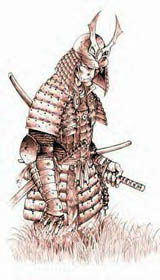 Katana
Samurai Katana is a Japanese sword used by Samurai during the time of feudal Japan. The samurai Katana is usually used and worn in pair with a shorter sword, such as a Wakizashi or a Tanto to form a Daisho.

Wakizashi
Samurai Wakizashi page has listings for the samurai companion swords, that’s how Wakizashi is also called. They are not much different from Katana swords in design, but somewhat shorter.

Naginata
Samurai Naginata section of our website has a selection of Japanese polearms called Naginata, which was mainly used by Samurai warriors.

Yari
Samurai Yari page has listings for another type of Japanese polearm – Yari, which was used by samurai and foot soldier in medieval Japanese army.

Tanto
Samurai Tanto is a traditional Japanese knife with the blade of about 30 cm. Samurai Tanto was primarily used as a companion sword with a Tachi as a pair of swords called Daisho before Katana and Wakizashi took over.

Beside of swords, other popular samurai weapons were polearms. Two most common types of samurai polearms are Naginata and Yari. A Naginata is a curved blade on a shaft and a Yari is pretty similar to a common spear. Both Naginata and Yari used the same high-quality steal used for samurai swords. There were variations on the shape and size of the blades and the length and the shape of the shafts as well. An interesting fact about Naginata is that it’s considered to be both men’s and women’s weapon and was a part of the samurai’s dowry.

Beside of using conventional swords and spears, samurai were trained to protect themselves with all kind of unusual things, and there are a few examples of exotic samurai weapons. A Tessen, or an “Iron Fan” was either a folding fan with metal ribs or a non-folding solid bar shaped like a folded fan. 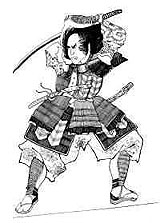 A Kansashi was a pin about 12 cm long that women used for holding their hairs, but women of samurai families used when needed Kansashi as weapon as well. One of the most unusual samurai weapons was Shakuhachi, which was in fact just a flute, but modified to be longer and heavier, it could be used as a weapon as well.

Sometimes Sai and Kama are considered to be samurai weapons, where in fact they’re not. Both types of weapons were originated in Okinawa and used by Ninja, but not by Samurai.

Early Japanese samurai armors were just simple solid metal cuirasses built up of several sections of metal plates, firmly laced together with a sort of a lacquer covering for protection against the rust. This kind of samurai armor called Tanko (meaning “short armor”) and could be dated back to the 6th century and even before. As the time passed, designs, materials, and components of the samurai armor were changing, getting its shape that we mostly know from the movies and other media nowadays at around the 13th through 16th century. On the left, you can see a picture of the traditional Japanese samurai armor called Yoroi or O-Yoroi (“Great Armor”) and its components.

The head of a samurai was protected with two pieces of samurai armor – a Kabuto and a Mempo. The Kabuto was a full battle helm and the Mempo was a face mask and beside their main function to protect from attacks, they had another not less important purpose – to intimidate an enemy, which explains rather unfriendly expression on most of the Japanese face masks. The Kabuto almost always was decorated with a Maedate (insignia) that could show a whole lot of things about a particular samurai from his belonging to a clan or a family to his occupation and religion beliefs. At the later years when the wartime was over in Japan, the Kabuto was often replaced with the Jingasa (a war hat) that was worn without a mask.

The centerpiece of the samurai armor was a cuirass or a Dou; the Dou was usually made of segments connected with hinges and wrapped around the body with openings on the back or on either of the sides. There were great many types and styles of the Dou varying from cheap Tamami Dou to more expensive and sophisticated armors, such as Dou Maru or Hamaki Dou.

The arm protection of the samurai armor was provided with two pieces: Sode and Kote. The Sode were shoulder protection similar to European pauldrons. And the Kote were armoured sleeves protecting arms and hands.

The lower body and leg protection of the samurai armor was secured with Haidate and Suneate. The Haidate was a thigh protection added to the samurai armor only in the 13th century and often disregarded by samurai as it was cumbersome and restricted their movement. The most common two types of the samurai Haidate were Kawara Haidate and Iyo Haidate. The Suneate was leg protection similar to European greaves and two most common types were Shino Suneate (splint greaves) and Tsubo Suneate (metal plated greaves).

For the centuries that Samurai were part of Japanese life and often ruled it, there were a great number of samurai armors and weapons produced in all possible designs and variations. Older samples of authentic samurai are much harder to come by and lot of them found their permanent residency in the museums. Yet it’s not impossible and from time to time interesting examples emerge on the surface and are available for keen collectors and enthusiasts. There are much more reproductions of course, but some of them are really masterpieces and can reflect and repeat all or almost all details of the authentic samurai armors not mentioning that they’re usually much cheaper than authentic pieces.

Kabuto (Helmet)
Samurai Kabuto is a full helmet that was used by Japanese samurai at the time of feudal Japan. The samurai Kabuto is usually made of two main parts: the hachi (bowl) and the shikoro (nape-guard).

Mempo (Mask)
Samurai Mempo is a samurai half-mask that was protecting lower part of the face and also served to intimidate enemies, giving a supernatural look to the wearer. Samurai mempo was usually worn with a kabuto.

Maedate (Insignia)
Samurai Maedate is an insignia or a badge that was fixed to the front of a Kabuto (samurai full helmet). Many different shapes of samurai Maedate were used and they could serve different purposes.

Jingasa (War Hat)
Samurai Jingasa is a samurai war hat that was worn either by lower rank samurai who couldn’t afford a kabuto (samurai full helmet) or by any samurai in a piece time. Samurai jingasa had several different designs including flat, conical, and round shapes.

Yoroi (Armor)
Samurai Yoroi is a classic Japanese Armour used by samurai at the time of feudal Japan; sometimes it is called O-Yoroi as well, which means “Great Armour”.

Dou (Body Armor)
Samurai Dou is a type of a Japanese body armour similar to a European cuirass that was worn by samurai during the time of feudal Japan. Depending on the style of a particular samurai Dou, it could be a part of the O-Yoroi (full armour).

Kote (Arm Armor)
Samurai Kote is an arm protection and a part of traditional Japanese armour (O-Yoroi) used by samurai. There’re several styles of samurai Kote that differ in their designs and constructions.

Sode (Pauldrons)
Samurai Sode is another type of arm armor, but designed for protecting upper arms and shoulders, similar to European pauldrons. Samurai sode was mainly of a lamellar construction giving a better protection to the arm.

Haidate (Thigh Armor)
Samurai Haidate is a thigh protection and a part of the traditional Japanese armor called O-Yoroi. The two most popular styles of samurai Haidate were Kawara Haidate and Iyo Haidate.

Suneate (Greaves)
Samurai Suneate is another type of leg armor, similar to greaves. Samurai Suneate were mostly of a splint construction and usually didn’t protect leg from behind. They were often made to match with Kote