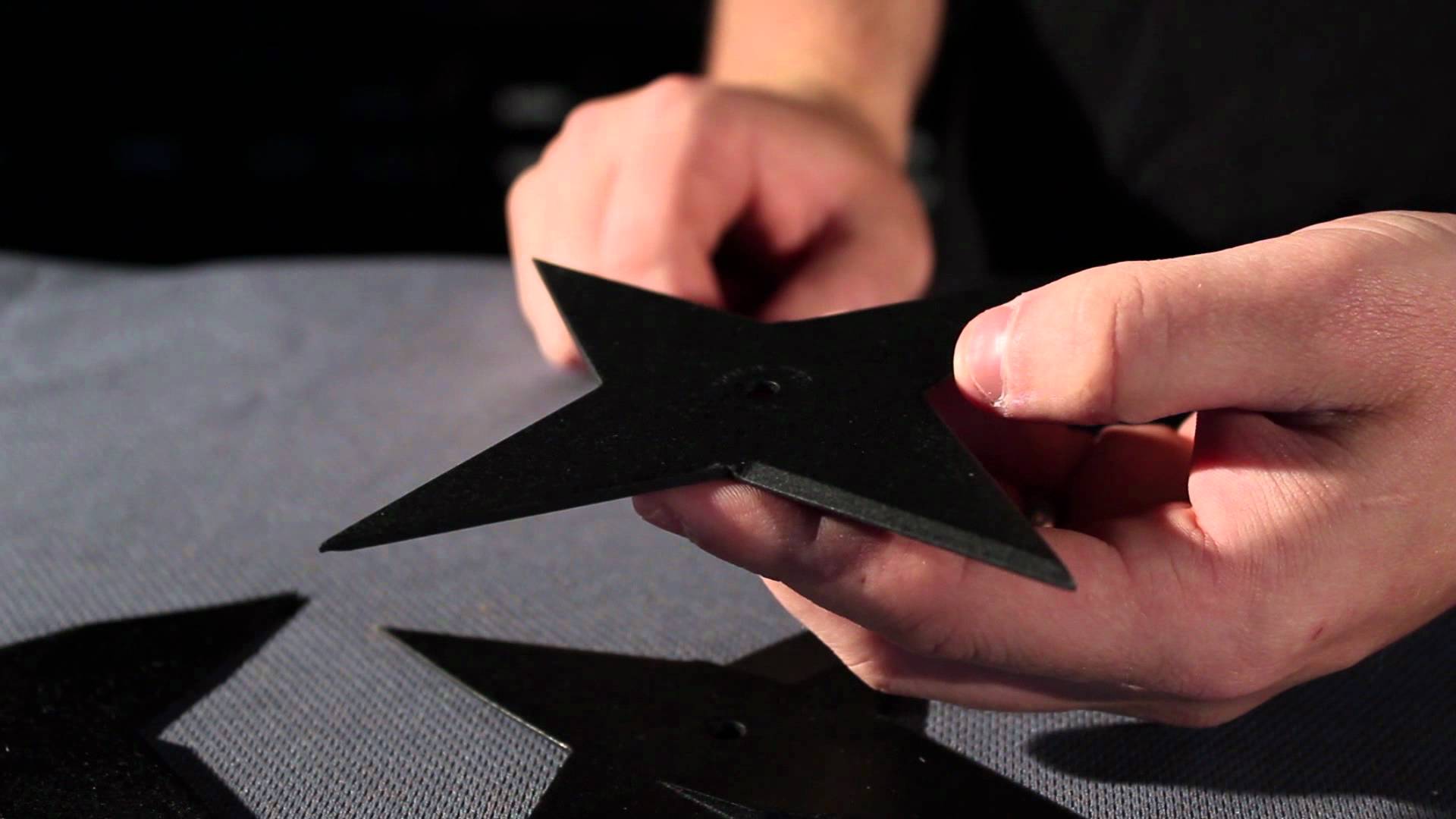 The Cold Steel Sure Strike (Medium) Ninja Star is a remarkably solid star.  It has serious heft and size with an extremely tough black finish.  If you want to skip to the good stuff, our overall review is at the bottom of this post.  The first thing you’ll notice when you take this ninja star out of its box is its size. This is a very large star and even in the medium size its heavy.  The Sure Strike comes in three weight classes, the Light, Medium (which we review here) and the Heavy.  The medium is a good choice for most purposes, and sticks well without being too heavy.  It weighs 4.2 oz and its outside diameter is 5 3/4 which makes it one large star. You’ll also notice that it doesn’t come with a case or sheath which is a bit of a disappointment. That being said this is a solid performer, and lets look at our different categories.

Sure Strike throwing stars are manufactured by Cold Steel by laser cutting high carbon steel that they then heat treat. They then moderately sharpen the stars before applying a black epoxy finish. I say moderately sharpen because these aren’t knife sharp out of the box, rather they have enough of an edge to stick in a soft target using the sheer mass of the star to cause a stick. When you look at the Sure Strike you can just tell that this is an extremely well made weapon, and the finish is quite durable.

You’ll be hard pressed to find a mass produced star that is more durable than the Sure Strike its that well made.  The epoxy finish is tough as they come, and keeps the star remarkably rust free.  If you take a close look at our photo of the star you can see some wear on an end where it hit some gravel but in no way does that affect its performance. You’ll get plenty of use out of this star with little to no maintenance.

The Cold Steel Sure Strike is relatively utilitarian in appearance.  You know its a throwing star but looks slightly like it might be something for your garden shed.  Its not flashy, but it doesn’t need to be.  This all comes down to personal taste but we like it, but there are more stunning designs out there to be sure.

This ninja star throws exceptionally well.  Its heavy enough to hold a good course to your target but not so heavy that its unapproachable for more petite throwers.  Its slightly less sharpened edges are actually quite forgiving for throwing insuring that you’re not likely to cut yourself during the throwing and release process.  This is a great all around star for the beginner to the seasoned veteran ninja star thrower.

Since the edges aren’t knife sharpened this takes some elbow grease to stick in targets of the harder variety.  It relies on its heft to get a good stick and as long as you really let it fly you can get a good stick but we’ve had a fair amount of bounce backs on harder targets.  You could sharpen up the edges and this would be a much different story.

The Cold Steel Sure Strike Medium is certainly not one of the cheaper ninja stars on the market but all of the other factors combined still make this a good value.  You can expect to pay $12-$14 for a single star.

This is one of the more popular ninja stars on the market so its widely available at a variety of retailers including:

Summary : For all around use this is one of the best ninja stars on the market. It’s extremely durable, easy to throw and built so well. It’s not the flashiest star out there but it’s more traditional design can win over most, and with one throw win them over. This is a Throw Ninja Star Top Pick.