Samurai Wakizashi is a Japanese single-edged short sword with a shoto blade. The shoto blade is a traditional size for Japanese swords and can be 30 to 60 cm (one or two feet) with an average length of 50 cm. Wakizashi was used as a companion or backup sword by Japanese samurai along with a Japanese long sword, Katana, and its literal meaning is a “side arm”. Samurai Wakizashi are made in the same design and using the same steel folded processing as Katana swords and they’re very similar in looks, but Wakizashi is shorter. Both Katana and Wakizashi used as a pair and as a pair they are called “daisho”, literally meaning “large and small”.

Samurai Wakizashi is known to be used since the 14th century, but originally the term “Wakizashi” did not necessarily mean any particular sword, but any side sword that could be used by a samurai. At that time, there were no standards and a few different swords types were used as side or companion swords, including chiisa-gatana and yoroi-doshi. It took in fact almost two centuries to regulate the types of swords and the social groups that were allowed to wear and use them. As a result of these efforts, in the late 17th century there was a low issue categorizing swords by their design and length. Yet as it was not followed to a letter and as a result there was still confusion in definitions of the main swords: Katana, Wakizashi, and Tanto. 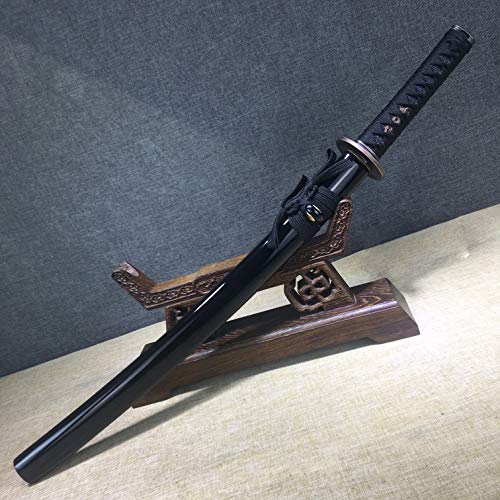 Samurai Wakizashi was mainly used as a backup weapon, finishing (decapitating) enemies and sometimes used for ritual suicides (sepuki or hara-kiri), hence it’s been known by foreigners as “the Honour Blade”. Despite the fact that Katana and Wakizashi is a pair of swords that worn together, they were very rarely used or wielded as two weapons simultaneously. The famous Japanese swordsman Miyamoto Musashi was known to master this skill, but it was not common or usual at all. This can be explained by the design of Katana, which is a two-handed sword and hence balanced for this use mainly.

Another use of Samurai Wakizashi was for close combat in enclosed spaces (such as houses) where there is not enough space to wield a large Katana. When entering a house, Samurai always left his Katana at the entrance, but Wakizashi would follow its master everywhere. You can say that Samurai never parted with his Wakizashi, keeping it ready for battle any time day or night.