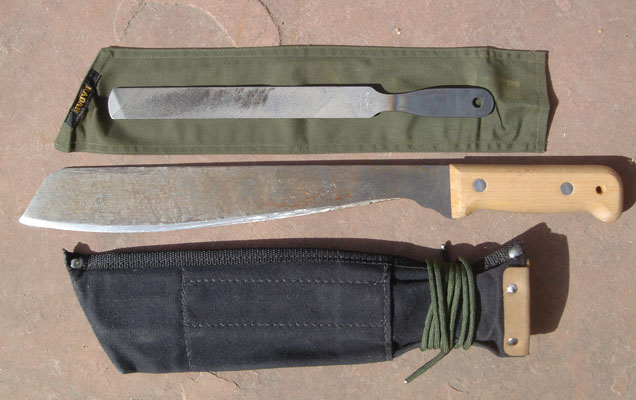 There are many factors that should influence your choice of a survival knife. Purchasing a knife can be quite an expenditure- you can spend hundreds of dollars on a “custom-made” survival knife, or you can spend the equivalent of a couple of weeks’ coffee money on a serviceable and functional knife. Before you go looking for your knife, ask yourself these questions: How often will you be using your knife? Will it sit on a shelf most of the year and only come out for a couple of backpack trips in the summer? If this is the case you may want a smaller, lighter knife for a survival situation only. Will your knife be used for extended periods of time, in primitive living situations for example? If you plan to use your knife for weeks at a time throughout the year, you may want to consider something larger and more robust. Do you prefer a folding or fixed blade? A locking folder as a survival knife is perfectly acceptable especially if your knife is in a survival-only kit. I keep a folding locker in my PFD survival kit for river trips. Otherwise, I prefer a fixed blade. A fixed blade is safer, and often longer and therefore easier to use than a folder, and more suited to “every day” or extended wilderness use.

Knowing what kind of knife you need is the starting point. Whichever route you choose to go, as with all survival gear, be sure to use your knife, get familiar with it, and know its limitations before you need to use it. Following is a list of considerations to keep in mind when searching for your survival knife. 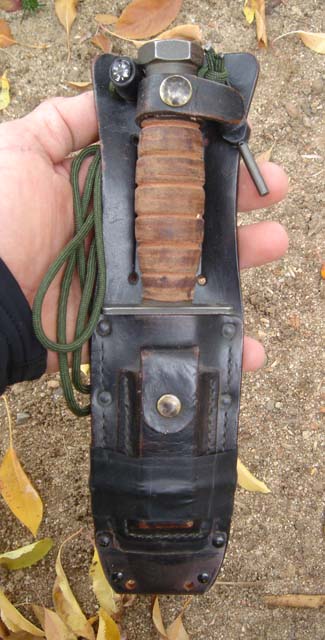 My personal choice as the ultimate survival knife especially for primitive living exercises is the USAF Survival Knife, seen in the photo to the right. The knife is a bit heavy for ultralight backpacking, but otherwise meets all of my personal requirements in a blade. It is available at most military surplus stores for about 35 dollars. Make sure you get the real thing, and not a cheap imitation. The best price I have found recently for the USAF Survival Knife is about 35 dollars at a website called Bestglide.com. The latest version is known as the SP2 Air Force Survival Knife and has a polymer handle and a mostly Cordura sheath. The overall knife design seems to be unchanged. It will cost closer to 50 dollars.

The sheath is leather, the snap is very secure, it has a number of holes where 550 cords can be tied for securing the knife to your body, and it has a pocket with a small sharpening stone. The raw leather sheath was kind of bright for me; mine is dyed with black shoe dye. The handle end of the knife, the butt, is a piece of solid steel and can be used as a hammer. There are sawteeth on the back of the blade- something I use a lot.

I keep a cord lock compass, a Hot Spark metal match, and a piece of 550 cord tied to mine. The 550 cord acts like a sling to carry the knife over the shoulder and is long enough for use on a bow for a bow and drill fire kit. Also wrapped around the sheath and covered with a Ranger band (a 1 1/2 inch length of bike inner tube) is 30 feet of 63-pound test nylon fishing line.

The Columbia River Knife and Tool (CRKT) company makes a full line of very nice, affordable knives. Most of these are folders, but very safe folders. They have a double locking mechanism that makes them as close to a fixed-blade knife as you can get in a folder. I keep one of them, from the M16 line, in my PFD survival kit.

I also have an older model- the Stiff KISS (pictured above with sheath and 550 cord wrapped on the handle)- which I carry as a lightweight survival knife for backpacking and hiking. The knife and sheath as pictured above weigh just four ounces. This is a skeletonized fixed-blade knife, unfortunately no longer available. They do have a newer knife with the same features called the Hammond A.B.C. There are two models- the Aqua model, with a blunt point for scuba and whitewater use, and the Operator’s model with a drop point for general-purpose use. The blade length for both knives is 3.75 inches. Overall knife lengths for Aqua and Operator are 8.5 and 8.25 inches respectively. Both feature serrated backs. They have recently added a version of the ABC with an orange handle- the ABC ER. It appears to be the Aqua model, with a blade length of 3.75 inches and an overall length of 8.5 inches. The ABC models are about 75 dollars each.

The Swedish company Frosts makes a line of fixed-blade survival, hunting, and fishing knives that are extremely reasonable in price. The knife pictured below, the Mora Military Survival Knife, has a carbon steel blade and costs about 15 dollars including the sheath. The knife and sheath together weigh about 4 ounces. It is about 8 3/4 inches overall, with a blade length of about 4 1/4 inches. Mora knives are quite functional, although a bit on the light side for long-term or primitive living use. As far as I know, none feature sawteeth. This is a good blade to carry in your pack as a survival knife. This knife is model number 760-MG. You can see this blade and compare it to many other Mora knives at a website called Ragweedforge.com.

When it comes to larger knives, the question of necessity must be asked- do you really need to carry something so large and heavy? How useful is it and what will you be using it for? I have a number of machetes among my knives and all have had extensive use during my travels in Central America for cutting my way through the thick jungle growth.

There is one machete however that has proved itself in my Utah travels- the Martindale Golok Number 2. It is a British-made, military-issue machete that is solid, strong, and has enough weight behind it to be a functional tool. While it is not something I would carry on a long backpack, or even on a day hike unless I knew that it would be absolutely necessary, I do take it along on all my river trips. It serves as a multi-functional tool for cutting poles and stakes for shelters (from driftwood and beaver-cut willows) and for chopping firewood to fit in the firepan. It is a hard item to find in the U.S. The best bet for locating one would be eBay, where I found mine. It was very reasonable a few years back, about 20 dollars, including shipping from the U.K. It came with the cloth sheath pictured below, which I now use for the sharpening file. I bought the file at the local hardware store, and the sheath specifically designed for the knife at Brigade Quartermasters.

The photo above shows the Martindale Golok No.2 machete with an issued sheath and an 8-inch Nicholson file for keeping it sharp with its cloth file sheath. The covered file fits along with the machete into the issue sheath. The machete is about 18 3/8 inches overall with a 13-inch blade. I keep a length of 550 cord tied to the belt loop on the sheath for slinging it over my shoulder for carrying. The whole kit as pictured above weighs one pound and 13 ounces.

Beyond the reasonably priced and functional survival knife there are hundreds of knives that are overpriced and are basically overkill, no matter how you look at them. The Gerber BMF might fit into this category, but this is something for you to decide. The truth is that this is a great knife. But it is just too much for me to carry these days, especially as an ultralight backpacker. I would consider taking it on a primitive exercise when I am carrying little else. The 150 dollars I paid for this knife in the mid-1980s can easily be surpassed these days by custom survival knives costing as much as 800 dollars (I am thinking specifically here of a knife designed by Tom Brown.) I carried the BMF on my LBE (Load Bearing Equipment) for years during my time in the Army and was very happy with it. Now it sits in my knife drawer with about 20 other knives I have collected and used over the years. 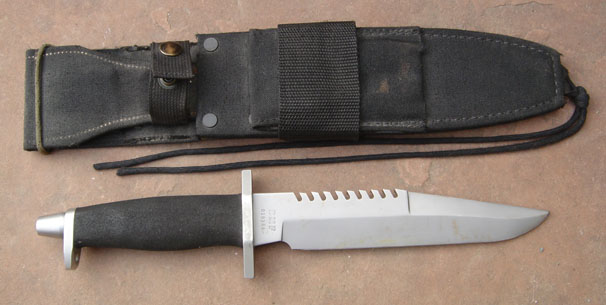 BMF stands for Basic Multi-Function, but I often referred to it in cruder terms. The knife is about 13 1/2 inches in length, with a blade length of about 7 3/4 inches. It is well-balanced and holds a very sharp edge. The blade is made from 1/4 inch thick high carbon surgical stainless steel, with Rockwell hardness of c54-55. It has enough weight behind it to hack through a sapling with a couple of swipes. It has features such as a solid butt for pounding, a full tang, large sawteeth, and a handle made of DuPont Hypalon that absorbs shock and stays put in your hand even when soaking wet. It also has a sharpening stone in the back of the sheath and a pocket in the front that came with a silva compass. I understand that this knife has been discontinued by Gerber, but they are still available on eBay for around 200 dollars, in case you must have one.