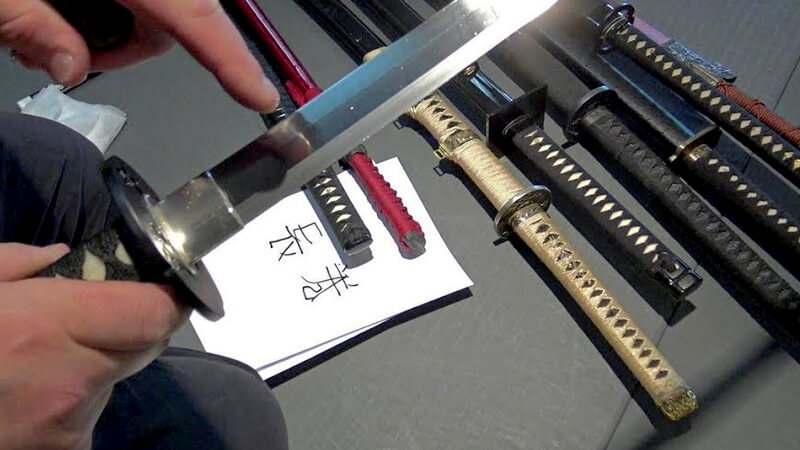 What kind of swords did Samurai use?

Samurai Swords are the main weapons of Japanese samurai used widely in the feudal Japan. Out of all weapons, samurai swords probably one of the most popular and famous due its razor-cutting qualities, orient-related mysteries, cold elegance and steel beauty. The popularization of samurai swords started in the middle of 1950s with the Akira Kurasawa’s “Seven Samurai” movie and still raising to the point that almost any movie that has a sword fight, would feature a Japanese sword, regardless of time, space, and quantum of the plot.

Samurai swords can be categorized by their size, the way of forging, and type of the blade (single-edged or double-edged). Even though Japanese samurai had used double-edged swords, singe-edged swords dominated completely the use of swords starting from the 14th century onward. The only place you likely see a double-edged Japanese sword (Tsuguri) would be a museum or a computer game.

There are four different size categories for samurai swords. The length of the blade for Japanese swords is measured in shaku, which is about a foot long or 30.3 cm. The shortest, long knives, are one shaku and less and called Tanto. Longer than one shaku but less than two are short swords, including Wakizashi and less common Kodachi. Samurai swords longer than two shaku but less than three are most common Japanese swords, such as Katana and less usual Tachi. Swords of a greater length than three shaku are field swords, such as Nodachi, and again not as common as Katana or Wakizashi.

Samurai usually used and worn a pair of swords, one long sword and one short sword. Such a pair of samurai swords is called Daisho, literally meaning “big and small”. Originally, Tachi and Kodachi were used as a Daisho, but later (around the time of Mongol invasion in 13th century) were replaced by Katana and Wakizashi. Sometimes on the battlefield, Tanto replaced Wakizashi as a more practical weapon in a close combat.

What type of steel is used in Samurai swords? Authenticated samurai swords are forged using a special technique that just a handful of craftsmen knows nowadays and using special Japanese steel called “Tamahage”. The steel is folded in on itself multiple times during the forging process, improving the strength and creating a fine, distinctive grain unique to each sword and impossible for models stamped from a mould. Differential heating and hardening is applied while forging samurai swords, which forms a unique crystalline pattern, called “Hamon” – a signature of authenticated forged Japanese swords.

The history of the Samurai Sword is quite fascinating even for non-collectors. For hundreds of years, the samurai operated as the sole armed force in Japan. They operated on a very rigid set of principles and guidelines much like the knights during the European Middle Ages. Their swords were the cherished weapon of these powerful warriors who were eventually abolished during the late 1800’s. Even though the samurai may no longer protect the nobility of the country, they remain symbols of the culture.

Beauty of the Japanese Swords

The Katana has long been one of the most famous swords that have emerged from Japanese culture. This weapon was wielded by the samurai in their battles. According to legends, the soul of the samurai who owned the sword was said to be bound to its blade. The Japanese Sword,  was even named by their wielders to demonstrate how important they were to the samurai. Now collectors all over the world can have their own swords thanks to a few online sites.

Stealth and the Ninja Sword

While the powerful samurai were required to fight according to a code of ethical conduct, the ninja were not bound by similar rules and often engaged in questionable tactics to accomplish their missions. For the nobility and leaders of Feudal Japan, the ninja served a wide number of functions, including working as spies and assassins. They also used swords, such as the incredibly beautiful Ninja Dragon Sword, to accomplish their jobs. Now these swords can be in the possession of a collector for an affordable price.

Japan was not alone in producing powerful and elegant edged weapons during their history, however. Many European sword makers were hard at work during the Middle Ages crafting the beautiful Medieval Sword  that could be used by knights and others in battles and in contests of strength and daring. Although they were usually larger and bulkier than their Japanese brethren, these swords from the Middle Ages served their purpose and could do serious damage to the foes of their wielder. Now these weapons are also available online.

Of all the weapons available, some of the most beautiful are the Dragon Swords. The attention to detail on the weapon is impeccable. Now replicas of these swords as well as the Katana Samurai Sword are affordable and obtainable online.If someone wants a Katana Samurai Sword, they don’t have to go any further than online.Description: First choice for Swords for any kind. Look for specialty swords like Samurai swords, Japanese swords, Ninja swords and More. Find more of the dragon sword and medieval swords