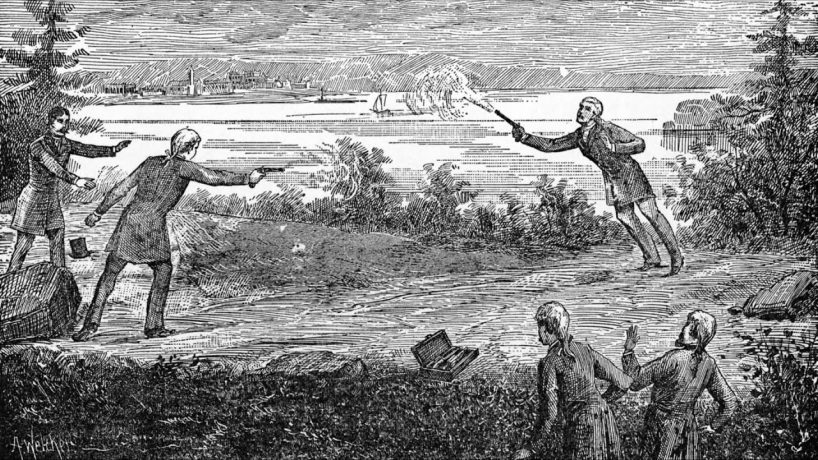 The Rise and Fall of Dueling

A duel is a type of arranged combat between two males who have matched weapons, in accordance to agreed-upon rules. Duels were frequently based after a certain code of honor.  They were fought not in order to slaughter the rival, but to actually gain plenty of ‘satisfaction’, which meant restoring one’s dignity and honor by showing that they were willing to risk their lives in battle.

A lot of people have this misconception that dueling rarely happened in history, and was only chosen as a last resort – But from America to Italy, tens and thousands of duels took place, with most participants belonging to noble and upper-class families.

The popularity of dueling waned during the end of the 19th century, and people ultimately lost interest when the major wars started breaking out.  Despite dueling being romanticized, it was actually a practice that stripped most men of their youth in battle. After the American Civil War, men no longer placed importance on their reputation to the extent they previously had.

Duels were highly popular in early modern Europe, and precedes the medieval code of chivalry.  It continued straight into the modern period, especially with military officers.  Duels were usually reserved for male members of noble families and royalty.  Petticoat duels are duels fought by women using swords and pistols.

Dueling code evolved throughout the centuries, as weapons and honor codes started to develop.  Even though there were plenty of changes throughout the years, many aspects of the dueling code remained the same.

There has been legislation regarding dueling that goes back to the medieval times.  In 1215, duels were officially outlawed by the Fourth Council of the Lateran, and a civil legislation from the Holy Roman Empire against dueling was been passed before the Thirty Years’ War broke out.  Beginning from the 17th century, duels started becoming illegal in countries where they were most commonly practiced.  The practice eventually fell out of favor in its native England by the mid-19th century, and across Continental Europe at the dawn of the 20th century.  Dueling continued its decline in the eastern United States in the 19th century.  After the American Civil War, it started losing popularity even further.  In the US, public opinion regarding the concept was what triggered the change, and not an imposed law.

During the 17th and 18th centuries, or perhaps earlier, duels have been fought with the help of swords.  But in 18th century England, men began performing duels using pistols.  Pistols and rapier sword duels resumed throughout the 19th century.

In ancient Europe, dueling became a ‘trial by combat’.  Two parties would battle this out, and whoever lost was the guilty party.  During the middle ages, dueling also became a public spectacle, with knights fighting in tournaments for honor and bragging rights.

Dueling became mainstream in Europe when the royal families started to take notice.  After a treaty between France and Spain broke down in 1526, King Francis I of France challenged King Carlos V of Spain to a duel.  The two monarchs frequently argued about how the duel should be properly arranged.  But because of this, dueling then surged in popularity all over Europe, especially in France. Under King Henry IV, at least 10,000 men died from dueling.  He eventually issued an edict against dueling, and requested members of upper-class families to submit their grievances to a tribunal of honor for redress instead, but dueling itself still continued.  Under King Louis XIV, at least 4,000 noblemen lost their lives during the ritual.

The first American duel took place at Plymouth rock in 1621.  The concept of dueling was far more popular in the Southern states, than the North.  The Antebellum society put the highest premium on both class and honor, and a duel was the ultimate way for men to prove that they had both of those qualities.

Plenty of duels in the South were fought between politicians or lawyers.  That’s because during that period, there was a huge influx of men joining the legal profession, so the competition was extremely tough.  Trying to snag a top position at law, not to mention keeping a pristine reputation meant everything for these gentlemen.  Each insult directed towards them had to be answered in a smart and swift way, in order to save face, and gain success and respect from their peers.

Even though a lot of people consider today’s politics as uncivil, back in the day, politicians slung bullets towards their rivals, aside from mud.  Judges, legislators, and governors who disliked one another ultimately settled their differences with a duel.  Those who were vying for a higher position in the office debated their issues with a duel.  These duels were held right before election day, and the results were published in the newspapers the following morning.

How Does A Duel Work?

Dueling was considered to be a courageous act, but not one single gentleman looked forward to participating in a duel, since they could risk both killing and getting killed.

Duels are being romanticized during the modern era, duels often rose from the simplest and most trivial matters.  A man could challenge another man to a duel if he was told that he smelled like rotten cheese, or if he spilled water all over his pants.  But it wasn’t like a duel would happen immediately after insults were traded (hitting another man was considered a criminal act and those who did so were considered social pariahs) – Duels were usually negotiated first, and it could take weeks or even months before the real thing took place.  The two parties would also exchange letters of apology, but if they couldn’t reach a peaceful resolution, then they would make plans to do have a duel.

If a man had accepted a duel, then they could no longer back out or refuse the offer – This would be an insult to both the challenger and the opponent. The opponent’s name would be denounced in the newspaper the following morning.

After a challenge to a duel has been issued out, the two parties had to settle several things first before resolving the matter.  The challenger would allow the opponent to pick his weapon of choice, and the conditions of the combat.  He could also choose what time and day the event would take place.  A friend of both parties will try to find a proper location from the dueling ground, usually away from the police and witnesses, since duels were considered illegal in plenty of states.

In a single combat duel, the two opposing parties would send out their champions, both serving as a representative of their respective armies.  The two champions would then fight to the death.  In this case, the duel would settle the matter, or will serve as a prelude to another bigger battle between the two parties. With the evolution of warfare, single combat duels became less and less prevalent.  However, this just became the precursor to the gentleman’s duel.

Nowadays, dueling, either with swords or pistols, might seem like a very violent concept.  However, this ritual completely made sense back in the past, especially in a society where male honor was absolutely paramount and honored.  A man’s sense of honor and chivalry was the main aspect of his own identity, so it should not be in any way tarnished by whatever means.  Duels were attended by a huge crowd, and this just gave men a very public reason to prove their dignity and courage.

The weapons used in a duel were highly varied. Those who were challenged to a duel were given a whole arsenal of weapons – Ranging from saber swords, to something silly like billiard balls.  Sometimes, duels were held in the skies, with both participants riding in separate hot air balloons, attempting to pop their opponent’s ride.

Swords were the most frequently used duel weapon up until the 18th century, when pistols came into popularity.  Gun manufacturers created pistols specifically made for dueling.  In a duel, the two parties’ weapons needed to be similar up to the last detail, so one of them wouldn’t have an unfair advantage over the other.  So, by the latter 18th century, many dueling pistols were in high production by fine arms makers all across Europe and the United States.

A dueling pistol was often a smooth, bored pistol which fired large rounds. The most common ones were .45 caliber, .50 caliber, and a .65 caliber.  Before being sold to consumers, the pistols were often tested out to ensure that they were equal in both appearance and performance.  Pistols became a highly prized possession, and were frequently passed from one generation to the next.