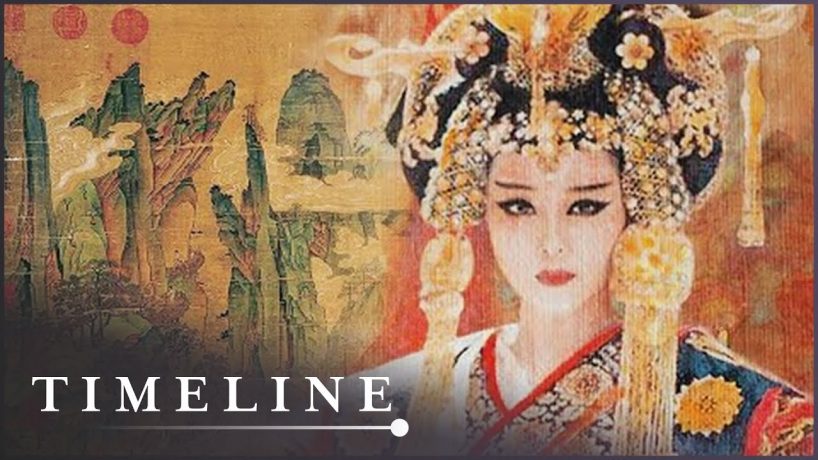 She was the only woman in the history of China to found her own dynasty and take the title of Empress Regnant.

In 636, the Tang Emperor Taizong heard of Wu Zetian’s beauty and summoned her to the palace. She became a low-level concubine of the emperor. She was only 14 years old.

Usually, once a girl enters the palace, she will never see her family again – something quite saddening to most.

When they were saying their final goodbyes, her mother was crying bitterly and Wu Zetian asked her, “Why are you crying? How do you know it’s not my fate to meet the son of Heaven?”.

Wu Zetian viewed her entering the palace as a great opportunity. She was a precocious girl. She loved to read history and discuss political affairs. She had a determined and resolute character, and she developed in to an expert of Thick Black Theory. Emperor Taizong have her the nickname Wumei, “mei” meaning “Enchanting”.

While the Emperor knew that she was something special and did favor her at times, there were 3,000 other concubines to contend with and she wasn’t quite able to win the Emperors heart. She had spent 12 years in the palace and hadn’t had any children.

Wu Zetian hadn’t managed to capture the heart of the Emperor, but there was a budding romance between her and Prince Gaozong.

When the emperor was Gravely ill, he suspected Wu Zetian and the Prince might be plotting something so he decided to put her to death.

One day, Prince Gaozong and Wu Zetian were together in front of the bed taking care of Emperor Taizong.

Taizong said to Wu Zetian, “Since I’ve been ill, the medicine I’m taking has had no effect. My condition is getting worse and worse every day. You’ve taken care of me for so many years, and I just can’t bear to throw you away. What do you plan to do after I die?”

Wu Zetian was a master of Thick Black Theory. She detected the veiled meaning behind the Emperors words and broke out into a cold sweat.

She quickly calmed herself down and said to Taizong, “Before I thought that I should die in order to repay your Majesty. But it’s possible that you may recover from your illness, so I shouldn’t die yet either. I think it’s a better way to repay your Majesty to fast and pray for your recovery.”

This was a very resourceful answer. She chose the best road. Actually the only road that would keep her alive. Taizong thought for a minute and agreed to this course of action.

While Taizong was still alive, the budding romance between Wu Zetian and Gaozong started to blossom. But things always have a way of changing.

The following year, Taizong passed away. According to the customs of the times, all of the consorts who did not bear children had to go to Ganye Temple and become nuns, including Wu Zetian.

On an anniversary of Taizong’s death, Emperor Gaozong went to Ganye Temple to offer incense and prayers. When he and Wu Zetian saw each other, it was very clear that the flame of their previous romance had not been extinguished.

She immediately recognized this and grasped this opportunity. She spoke with him and started reminiscing about the times they had shared together. Emperor Gaozong took her back to the palace with him.

Return To The Palace

This second time entering the palace Wu Zetian was already 28 years old. While she was still attractive, she could not compete with the 19 year old concubines on physical beauty.

She, however was unmatched in experience and cunning. She had plenty of Thick Black tricks up her sleeve. She knew she already had a history with Emperor Gaozong and if she maneuvered correctly she could win his heart.

At this time, Emperor Gaozong did not favor Empress Wang as she had not born any children. He much favored his concubine Consort Xiao who had one son, Li Sujie and two daughters – Princess Yiyang and Xuancheng.

Empress Wang, seeing that emperor Gaozong was still impressed by Wu Zetian’s beauty hoped that the arrival of a new concubine would divert the Emperor’s attention from Consort Xiao, so Empress Wang was very good to Wu Zetian. In turn, Wu Zetian was very respectful to the Empress.

In addition, the Empress and Wu Zetian joined forces to force Consort Xiao out of the picture and since Wu Zetian was liked by the Emperor and Empress she quickly moved up to “Zhaoyi”, the highest ranking concubine. But remember – Wu Zetian was an expert of Thick Black Theory.

She wasn’t satisfied with just being the top concubine. She had her eyes on the position of Empress. She waited until her position as “Zhaoyi” was solidified, then started implementing her plan. By this time she had four sons and two daughters with the emperor.

Her second born was an extremely cute girl who the Empress liked very much. One day, right after the Empress came to see the little girl, Wu Zetian poisoned her own daughter.

When the Emperor came and found his daughter dead, he was sure it was Empress Wang who killed her out of jealousy. So, with the execution of this plan Wu Zetian disposed of Empress Wang and captured the title of Empress herself.

From the time she entered the palace until the time she became Empress, she didn’t really have especially good luck. All of her success was a direct result of her precise planning. She implemented her Thick Black gongfu very well.

In order to attack Empress Wang, she even killed her own daughter. It’s very difficult to compare her “thickness” and “blackness”. She kept focused on the result she wanted despite the occasional setbacks and finally achieved her goal.

This is an extreme example and I wouldn’t suggest that people go around killing their own children. But from this example we can glean a sense of the “spirit” of Thick Black Theory.

Everyone has the power to decide their own fate

Wu Zetian was a poor peasant and she managed to become the only female Emperor in the history of China.

She is a classic example of how someone can change their own fate. Even though some people abdicate this power, we hold our lives in our own hands.

Therefore, the first step to enter the Temple of Thick and Black is to put yourself at the center.

The path to all your needs and wants starts from within. As long as you maintain this mindset, the criticism of others can’t disrupt your operations.

As your grip strengthens on the paintbrush, you gradually become Thicker and Blacker. You become the Master of Yourself.