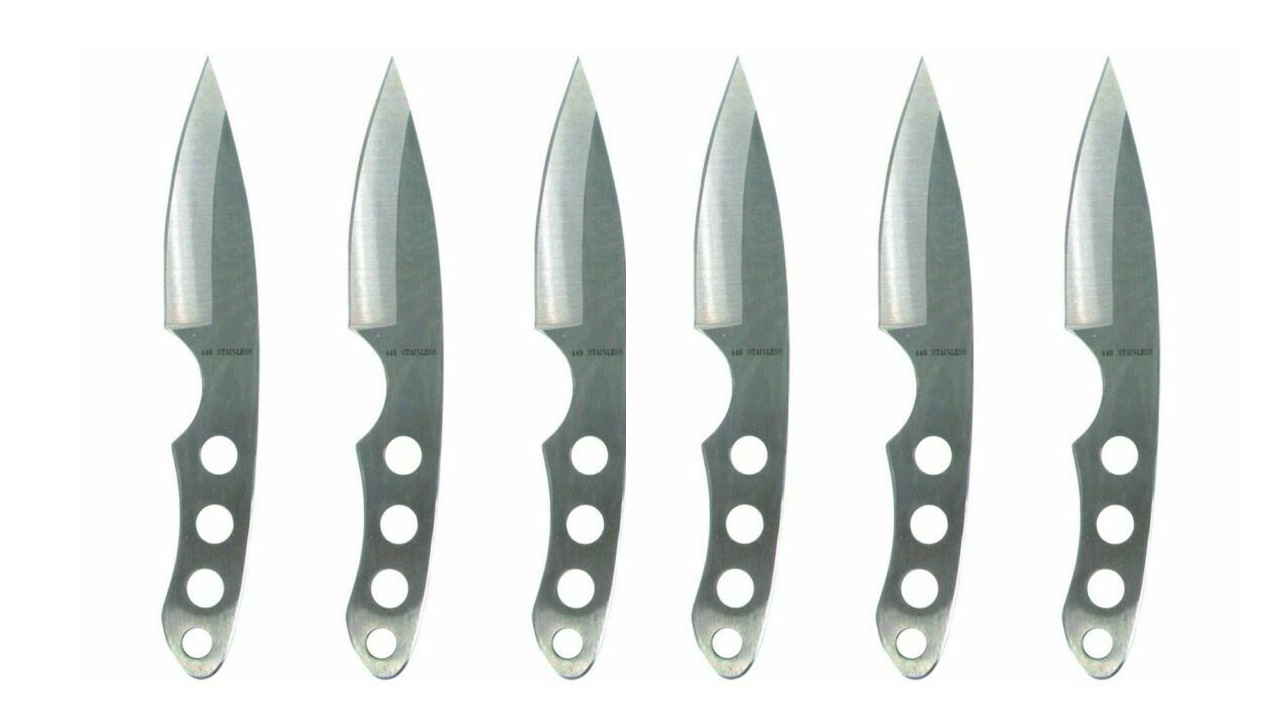 Well, they’re cheap, so it’s not like you’re shelling out big bucks.

This set probably costs less than last night’s dinner; and it’ll last longer too.  How much longer?  Well, that depends on how you use them.

Constructed of 440 stainless steel, the Ninja Stealth throwing knives are a fun, cheap starter knife for kids and beginners.  Overall length is 7 inches; blade length is 2.75 inches, and there is a subtle curve from one end to the other.  There are four circle loops in the handle, but don’t assume that your fingers can fit in those.  These are not “finger rings”.  This knife isn’t big enough for that.

But it does look cool.

These come as a triple set and include a black nylon sheath.  For under 10 bucks, it’s a pretty good deal.

They are actually pretty well-balanced for throwing.  Since they’re small, thin, and light – and are made of stainless steel – you’re better off throwing them against soft targets.  Several sheets of cardboard glued together to make an ideal target for them.

Small knives like these aren’t made for serious throwing.  For half-spin out to maybe 1 ½ spin throwing indoors or with no wind, they’re a lot of fun for kids or beginners.  Serious knife throwers will be disappointed, however.

But don’t make the mistake of thinking these are just toys.  Any throwing knife has the potential to hurt someone, so “play” responsibly, and always supervise your kids when they’re handling them.

Cheap stainless steel bends and breaks when you throw it against hard things like wood targets or bounce it on concrete driveways.  So just throw them at cardboard and it’s all good.  They’re also small and light, so they bounce back pretty far on bad throws.  Again, throw against cardboard instead of wood, and this problem goes away.

Also, the sheath is nylon, so it’s only going to last so long.

Hey Kids!  Try This At Home!

If you’re buying these little ninja throwing knives for your kids, be sure to run the blades on the sidewalk several times to dull the edge and make them safer to handle.  Don’t worry, throwing knives (the ones for sport) aren’t really supposed to have sharp blades anyway, and dulling them won’t in any way impair their performance.

As long as the tip is sharp enough, it’ll stick.  And if you’re throwing at thick cardboard targets (which I advise with small throwing knives like these), then they might even stick from the handle!  So there’s no need for them to be sharp…