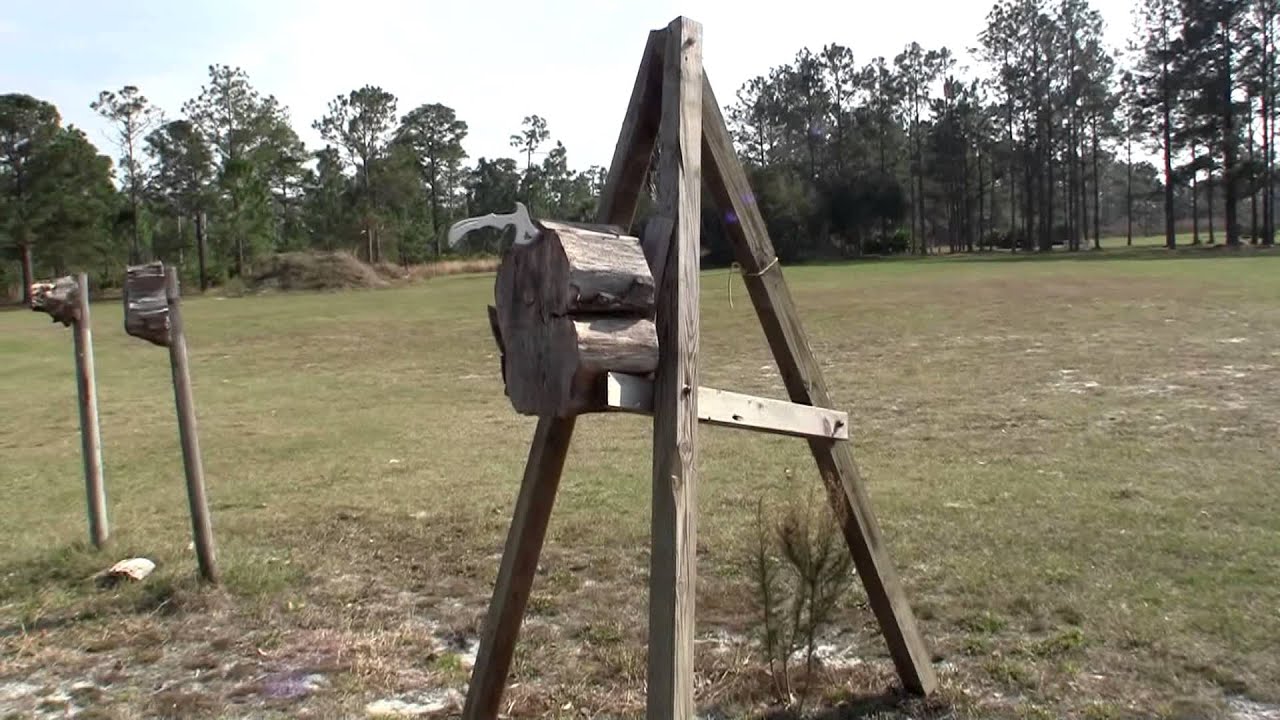 Throwing knives is an ancient art. People have used it for both a form of self-defense and entertainment. Over the years people have become skilled and accurate as they discovered knives that were the perfect weight and size.

One key to throwing knives accurately is the way it is gripped. There are two basic ways to grip a throwing knife. They are the hammer grip and the pinch grip. Once a person understands how to hold throwing knives they are able to develop better knife throwing techniques. These techniques have improved accuracy to such a degree that people were able to develop a number of very intricate and seemingly dangerous tricks. However, because of the way the knife is gripped and many hours of practice the things experienced knife throwers are able to do are actually quite safe.

How To Throw With A Hammer Grip

For many people deciding how to throw the knives comes down to the pinch grip vs hammer grip. Many people find the hammer grip to be the easier way to hold the knife. As the name implies, the hammer grip calls for the person attempting to throw the knife to hold it as one holds a hammer. The thumb is placed on the knife’s smaller side of the knife. This area is called the spine. This method is said to help people get a better aim. Having a proper aim is crucial if one hopes to safely keep attackers at bay or complete intricate feats with the throwing knives. 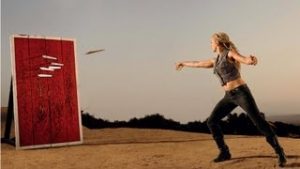 Once one person has a good grip on the knife the next step is to hold the arm in the proper position. The most effective way to do this is to keep the wrist stiff while preparing to throw. Failing to do this will cause the knife to rotate uncontrollably. Throwing knives can be very sharp. If you are using are sharp knife it is essential you use the hammer grip on the handle of the knife. The weight of the knife also makes a difference in the type of grip one chooses. Heavier knives are controlled when the thrower uses the hammer grip.

Once you have mastered the grip it is now time to begin actually throwing the knife.

Grab the knife by the handle, bend your elbow at a 90-degree angle, and hold your arm in front of you. Next, move your hand back and up keeping your eyes on your target. When you are comfortable quickly swing your arm forward and release the knife directly at the target.

Sometimes the knife spins forward when you release it. Occasionally, it can even spin backward. In either case, it means you have put too much forward or backward momentum on the knife. Try opening your hand at the point release without too much downward pressure. A smooth release is critical with the hammer grip.  You may also need to decrease the amount of force that you used as well.

How To Throw With A Pinch Grip

The pinch grip, on the other hand, is the best method when using smaller knives.

The thumb and the index finger should be used to grip the knife, with the knife in alignment with the thumb.  This should be done in a way that turns the knife almost into an extension of the arm. It should form a straight line with the arm, from your elbow all the way out to the end of the knife. Using about 2/3 of your coiled up index finger, you should press the knife against your thumb. Some people find they have more control when they hold the knife with their fingertips, but most will press the knife into the side of their index finger.

Sensei Tim Rosanelli explains the pinch grip very clearly in this  YouTube video.  Watch it if you’re new to throwing.  Some guys are great throwers but lousy teachers, but Rosanelli breaks it down very clearly.

The pinch grip can also be used on heavier knives or to throw the knives further. To do this it requires a slight modification of the grip. When the knives are heavier or throwing at a greater distance is necessary then the knife thrower may have to use the middle finger in addition to the thumb and the index finger to hold the handle. Depending on how sharp the knife is the pinch grip can be used to hold the blade of the throwing knife. For knives that are sharpened on one side only, it’s possible to hold the knife carefully and throw it using the pinch grip.

It is important when holding the knife which is sharpened on one side very carefully when you are using the pinch grip. Make sure the blade does not extend too far into the palm of your hand or you may be in danger of cutting yourself. Hold the knife so the sharp edge faces away from your palm. Hold the knife tight enough so it will not slip out of your hand too early. But do not hold it too tight. That could lead to putting it in a cramped position. A relaxed throw is usually an accurate throw and when throwing knives it is very important to be accurate.

The throwing motion with the pinch grip is very different than the motion used with the hammer grip. With the pinch grip, your middle finger is used to locate the knife’s center of gravity or balance point. Use your thumb and middle finger to pinch the knife at the center of gravity. Next, put your index finger on the knife’s spine. Hold your arm out. Put your upper arm at a 90-degree angle relative to your torso. Next, bring your next to your ear. Your index finger should be pointing towards the rear. Snap your hand downward and outward while the knife is being held loosely. This should make the knife go directly from your hand to the target.

Depending on the grip method you use either the thumb or the index finger directs the knife. That guiding finger helps the knife to resist the impetus to rotate and helps to keep it on target. It is important for people who are learning to throw knives to use identical arm and body movements and the same amount of force each time they throw. It is recommended they begin about 12 feet from the target. When they can consistently control the number of times the knife rotates and hit the target they can then move back 4 feet. They should practice throwing the knife from 12, 16, 20, and 24 feet from the target.

A smooth release is essential whether you use a hammer grip or a pinch grip. Developing the right technique will take time. However, if you enjoy what you are doing it will be a labor of love. You will know the exact number of times the knife rotates before it reaches the target. This will allow you to decide if you should hold the handle or the blade when throwing the knife. For example, at 12 feet the knife will rotate once, but it will rotate one and a half times when thrown from 16 feet. This will necessitate holding the blade when throwing from 16 or 24 feet.

There are pros and cons of each throwing method. The key to success is to develop a smooth, consistent motion, have the heels of both feet online with the target and follow through.