This first a question of semantics, is it batman throwing knives, a batman throwing star, or just a Batarang?  We could debate about this all day but let’s get to the good stuff.  I know you want to throw pointy things that look like bats and will stick into a variety of things like wood, watermelons, and supervillains.

We would never advocate throwing anything pointy at another living being. Period. End of Story.

I don’t know specifically what is meant by a Batarang but the rang part makes me think of something that will come back to you.  Bing bong bang its boomerang!  These aren’t coming back to you I promise you that.  They are indeed sharp and pointy and will penetrate almost anything they are throwing against.

I’m sure they can’t call it a Batman throwing knife for licensing reasons, but that’s what it is.  Okay maybe not, maybe it really is a batman throwing star.  It has multiple points, so for our purposes, we’ll call it just that.  If you are even remotely a fan of Batman you’re going love these throwing stars.  They look super cool and have wicked sharpened edges.  Believe it or not, you can actually throw and stick these as well.  I bought a set for my son and he loves them.  He is very protective of them and only will throw one, as the other is kept in its sheath safe and sound for display purposes.  On top of that these babies are big!  Most ninja stars are around 3-4 in their diameter but these bat flip ninja throwing stars (rolls off the tongue) are 8 wide.  Okay, enough intro let’s get to the full review.

As I stated these stars are 8 wide which puts them on the larger end of the spectrum for what would be classified a throwing star.  Maybe that’s why I want to call it a throwing knife since 8 is pretty standard for sizing.  They each weigh about 4.5 ounces and are made of stainless steel with a matte black coating.  The edges are knife sharp and in fact, the longest edges are downright lethal.  There are really 4 sharp points on these stars with the bat outline ears and the lower point I wouldn’t count as a star.  The black coating is prone to scratching and wear but that’s not a serious concern.

The sheath is a simple nylon fold-over that is nice to have to keep those pointy edges covered.

The batman throwing knives are reasonably well made. The narrow sharp points of the stars while enabling a really good stick can be prone to bending as the metal is relatively soft.  More so than some of the others you should be careful that your backstop is reasonable and you avoid rocks and other more dense items to keep them throwing their best. 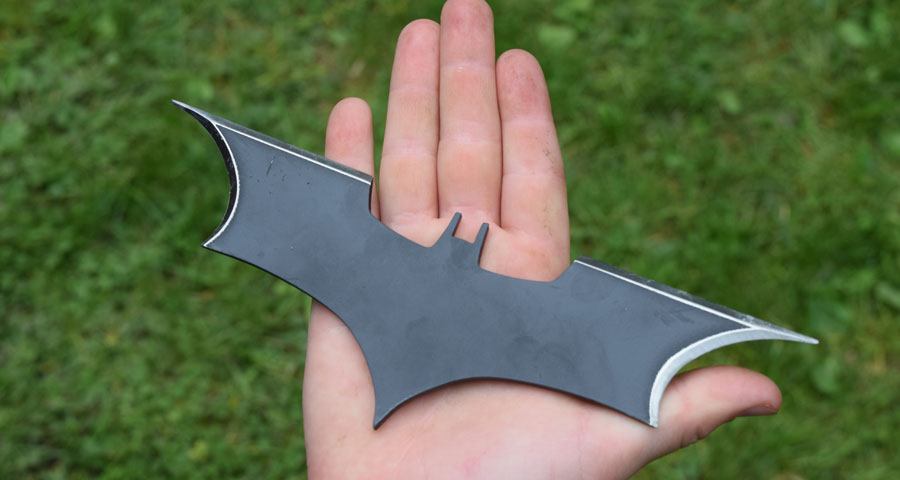 These stars are awesome looking.  No doubt.  My Jr. reviewer gives them his full blessing.  While not a traditional ninja star they are a great addition to your collection.

Since these are big stars you have a fair amount of surface area to hold onto so for that aspect gripping is not a problem.  The challenge comes from all of their pointy parts.  Fortunately, the ears and the tail point aren’t sharpened so you can figure out a grip that works.  It just took a bit of trial and error to find a grip that worked for me.  All in all they throw just fine.

When looking at the batman throwing knives the first thing in my head was that this is going to be tricky to stick.  Fundamentally it seems that it has only 2 points.  Mess up your rotation and you’ll have a miss.  Boy was I wrong.  This thing sticks most anyway.  It’s got enough heft to it that you can stick it in just about any point sharpened or not.  If you have a nice soft target you’ll be hard-pressed to get a bounce off.  Most times you’ll get one of the larger points, then the smaller wing point.  I’ve stuck it several times mostly with the unsharpened bottom point and even with the long top edge with the unsharpened bat ears.  The challenge especially on the long thin points is that the continued force of the star striking the target can cause that thin point to bend.  You have to be prepared to straighten an edge occasionally.

These stars are reasonably priced, we bought ours for $14 for a set of two with the pouch.

Note: These seem to sell out quickly at a variety of places and bladeplay is about the only one with stock. They are back up at the moment at Blade Play which is good news and come in a set of 2. This is a relatively specialty item and some variants are carried at a variety of places.  This particular model was purchased from Bladeplay one of our recommended retailers.