It’s rare to achieve fame, and rarer to achieve it in two fields. But then Sho Kosugi is a rare kind of individual. Born in Tokyo, Sho started martial arts training at the age of six. By the time he was 18 he was already named All-Japan Karate Champion. He relocated to Los Angeles in 1968 when he was 19 years old, and by 1974 he had captured a total of six hundred and sixty-three trophies and cups for his martial arts skills. But Sho had another dream: to become a film star.

After spending several years as a starving actor while teaching martial arts, Sho landed a co-staring role in “Enter the Ninja” which kick started his acting career. In addition to the Ninja films, Sho starred in other blockbuster movies such as “Black Eagle” with Jean-Claude Van Damme, “Blind Fury” with Rutger Hauer and “Shogun Mayeda”, aka “Journey of Honor”, with Christopher Lee, Toshiro Mifune, John Rhys-Davies and Polly Walker. In 1998 he founded the Sho Kosugi Institute (SKI) to pass on his skills and experience to others. Zigzag Asia caught up with Sho in Tokyo last week.

Can you tell us about SKI (Sho Kosugi Institute) and why you started it?

SK: Ten years ago I started receiving letters and requests to teach martial arts and acting, but at that time I was too busy to do anything about it. I was acting, directing, producing, raising three children and I needed time for my own training. I still train three hours a day. Five years ago I decided to make a school for Asians to give them a chance to become actors.

I went to the States when I was 19 years old, and I wanted to give kids the same opportunity I had had. Our first plans were to make a big acting school in Hollywood with a 50 million US dollar budget, but unfortunately that did not work out. We already had about 20 people who were ready to attend this new school, so we decided to make a smaller school instead.

How many schools are there at the moment and are there plans to expand to other countries?

SK: We now have schools in Hollywood, Nagoya and Tokyo. The Tokyo school recently opened in October. We already have about 60 students. There are plans to make eight more schools in Japan, and we are talking about making more in Korea, Taiwan and Europe too.

What are the kids like at your schools? What is your mission?

SK: Kids now are very spoiled. When they first come to our class, some of them cannot even stand up straight or listen to the teacher properly. But after a while, they change and improve. We want to start people very young. 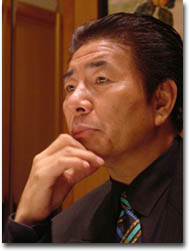 Kane, my first son [who is a famous TV celebrity in Japan], started training when he was a year and a half. He started Judo at three, gymnastics at three and a half and Kendo at four. As you know, Tiger Woods started very young too. We teach martial arts, acting, singing, Tae Kwon Do and Kung Fu. All classes are taught in English by teachers from all over the world. My younger son, Shane, is a supervisor at the school in Nagoya. I want to teach kids respect and discipline.

Are you unhappy with the Japanese education system?

Yes, it is very wrong. They only study for entrance exams, and the name of the school you go to decides everything.

What do you think about the youth today in Japan? Is it the parents’ fault? How about all these killings and is there any way to stop this? What is wrong with the society here?

SK: The education system is wrong. I am not the prime minister so I can’t change everything, but at least I am trying to change things my way. I think parents are spoiling their kids because they didn’t have much when they grew up, so they are giving their kids everything they want.

How did you get into martial arts and ninjas?

SK: I was a very weak child. I had a hole in my lung. I was very tall but I was weak. I am from a poor family. My father was a fisherman and sometimes we had nothing to eat. My parents, instead of taking me to the hospital, took me to the local dojo to make me stronger. I practiced karate but I wanted to become a baseball player when I was younger. When I failed to get into Keio University, I was so depressed that I tried to kill myself. I tried to commit suicide. I was a very pure child. That is when my sister told me to go to the US, to go abroad. So in 1968, with 120 dollars to my name, I left for LA.

When I first arrived, I wanted to go to Little Tokyo but I got on the wrong bus. I was dropped off at 8pm in the middle of nowhere, downtown. This place was a very bad neighborhood for a Japanese kid to be in. I was walking around with two suitcases, and a camera around my neck. Soon there were three big drunk guys surrounding me. They offered to carry my suitcase for me, so I let them at first. Then I grasped what was going on and tried to take the bags away from them.

Then one of them took out a knife from his jacket. He was drunk and wobbling but he came at me. I tried to kick him in the groin at first but he was coming at me so my foot hit him right in the center of his stomach.

That one blow took him down and he was spitting blood from his mouth. The next thing I knew, there was a whole mob surrounding me and I had my back against a wall. Someone had called the police and I was taken down, handcuffed, to the station. Some people had seen the entire incident, and I claimed it was out of self-defense, so I got off without any problems.

How I got into ninjas was almost by accident. While I was a starving university student I was juggling five jobs and also teaching martial arts. I wanted to become an actor, but I was only doing extras for eight years! In 1980 they were going to do a ninja movie and they needed stunt men. I was chosen as one of the six stunt men out of 600 applicants. On the first day of the shoot, the main star, who was also the director, was fired! The second day was my shoot. The new director and producer liked my action scene so much that they changed the script and made me the co-star! I was the bad guy but I was the head honcho of the bad guys! After that movie, I had people calling me about making ninja movies with me as the star.

What do you think about the film industry in Japan?

SK: I hate to say this, but they are very behind. They are not entertaining. You go to a movie in the States to enjoy it and have a good time. You cannot enjoy most Japanese movies because they are too complicated. You have to think and wonder about what the movie was about. In that sense they are still very behind.

Tell us about your family. How do you think it was for Kane when he first came to Japan?

SK: I think it was tough for him. When he first came to Japan, he had been in seven or eight movies with me in the States. When he said he wanted to become an actor, I told him to go to Japan. I told him he should know Japan and the culture. After that, his first job was in an NHK drama with me eight years ago, and he has stayed here ever since.

He did not like it here in the beginning. He would call my wife and complain, but never to me. I can imagine, though, he had a big house and everything back in Hollywood. I gave him a small apartment and he had no friends at the beginning. He had to do everything himself. Shane had not struggled as much. Kane always says that Shane has got it easy because Kane and I have made the road for him. But as the younger brother, he is feeling pressure too.

Do you speak to Kane and Shane in English? Why?

SK: Yes, I speak to them in English. I was so busy when they were growing up I didn’t have a chance to teach them Japanese!

Like your schools, ZZA is also trying to make a bridge between the East and West. What does Japan need to do to be better understood abroad?

SK: More younger people should travel abroad and learn to see Japan from outside, from a different perspective.

What’s the secret to your good health? I heard you drink a tremendous amount of water every day.

SK: I wake up at 5am every morning to train. I practice martial arts, I work out with weights, I stretch, etc. And, yes, I also drink a couple of liters of water every day. [Sho wears 6kg weights on his ankles every day. He didn’t tell us that until I noticed them on his ankles when he stood up!]